The Advanced Aerodynamic Design Center for Ultra-Efficient Commercial Vehicles was established in 2016 through the University Leadership Initiative.  The center is tasked with developing a more aerodynamic aircraft wing.  Research activities focus on demonstrating a wing design concept for reducing aircraft fuel/energy consumption by 70%, compared with the 2005 baseline for revolutionary and transformational aircraft configurations. This will be accomplished by advancing the concept of a slotted, natural-laminar-flow (SNLF) airfoil. 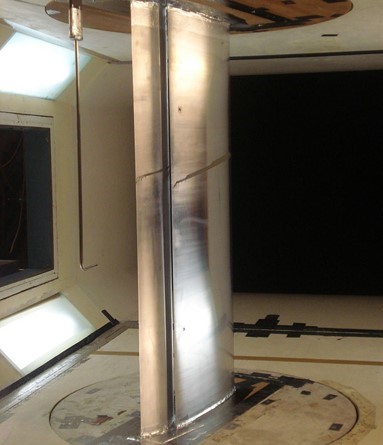 How can an airplane harness airflow for more efficient flight?  In contrast to conventional, single element airfoil designs, the SNLF design incorporates a slot which acts as a second element on an aircraft wing. The mutual interaction of these two elements promotes more favorable airflow and pressure across the wing.  This is called laminar flow and is characterized by the “orderly” flow of air in parallel layers. At higher speeds, airflow transitions to turbulent flow across certain shapes.  Turbulent flow disrupts the parallel flow of air, creating resistance, or drag on the airplane. By minimizing turbulent flow, the SNLF design will achieve more efficient flight at cruising speeds.

The SNLF airfoil also has a much greater capacity for lift than its single element counterpart.  An aircraft utilizing an SNLF airfoil could achieve the lift necessary for landing at low speeds without the added weight of larger landing flaps or more surface area on its wings.  This concept promises to streamline wing design: reducing weight, drag and the need for thrust – which all contribute to the objective of reducing fuel consumption.

Through the NASA-funded University Leadership Initiative, the University of Tennessee-led team will build on this progress by maturing the SNLF airfoil for use in a fixed-wing, commercial aircraft. The airfoil will be integrated into a transonic truss-braced wing (TTBW) configuration.  Pairing the SNLF concept and TTBW configuration will minimize drag across the wing, paving the way for ultra-efficient flight!

Researchers will employ both computational and experimental methods to develop and refine the concept of the SNLF airfoil.  In parallel, research will explore opportunities to incorporate enabling technologies, such as advanced materials, new propulsion configurations, fluidic oscillators and adaptive trailing edges.  These innovations will be integrated into the design of a fixed-wing aircraft with the SNLF airfoil.  Research tasks will proceed in three phases:

Carrying out research tasks at each of these phases will be a collaborative effort that brings together industry partners, faculty, and students across the country to achieve a series of research milestones.  Technology development and integration will be driven by computational research to simulate the performance of the wing and components.  These results and predictions will be validated by a series of wind tunnel experiments.  This will guide the design and optimization of the final SNLF airfoil.  The airfoil will be tested in in the NASA Ames 11ft Transonic Wind Tunnel to demonstrate the viability of the SNLF technology.

The SNLF concept will be strengthened by enabling technologies, including active flow control to enhance maximum lift and piezocomposite trailing edges as a control effector.  A rigorous review will identify and mitigate the sources of drag across the aircraft.  This review will inform other design decisions so that the efficiency of the aircraft can be maximized. 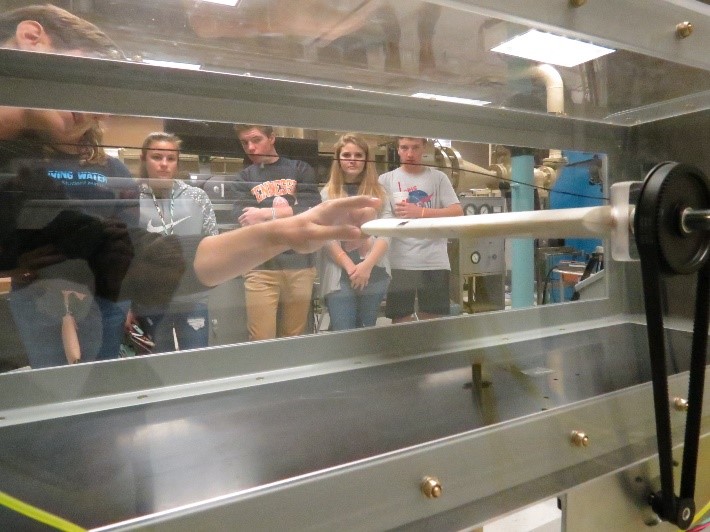 Demonstration of laminar-turbulent transition in a wind tunnel at UT Knoxville. 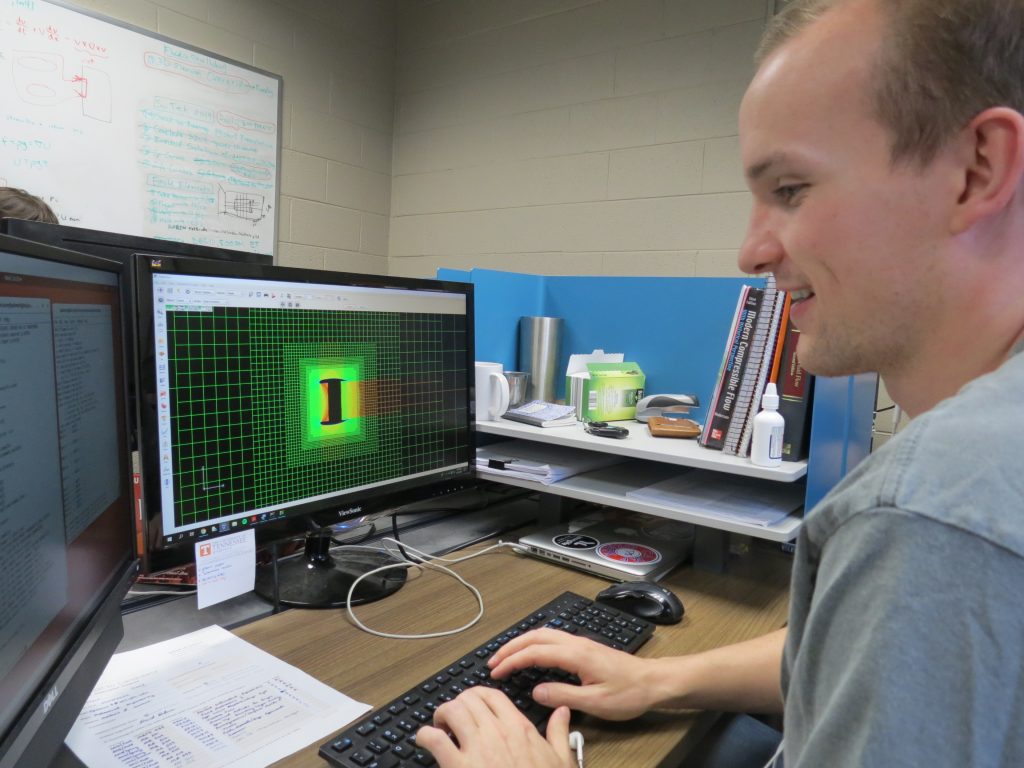 Research Assistant David Palmer visualizes the solution for a nacelle engine in FieldView.

The optimized airfoil will be integrated into a commercial transport-scale aircraft to demonstrate the viability of the technology.  For this final task, the ULI-team has targeted a next-generation aircraft configuration designed by Boeing.  The Boeing SUGAR High has a long, high-aspect wing span supported by a strut, or truss, that reduces drag during flight.  Coupled with the SNLF airfoil, this configuration has the potential to dramatically reduce fuel consumption.

Progress toward this technical challenge is measured in discrete milestones, culminating in Milestone 7, the demonstration of a more aerodynamic aircraft wing in year 5 of the project.  The center monitors and reports on milestones through technical reports, annual reviews and external presentations and publications. 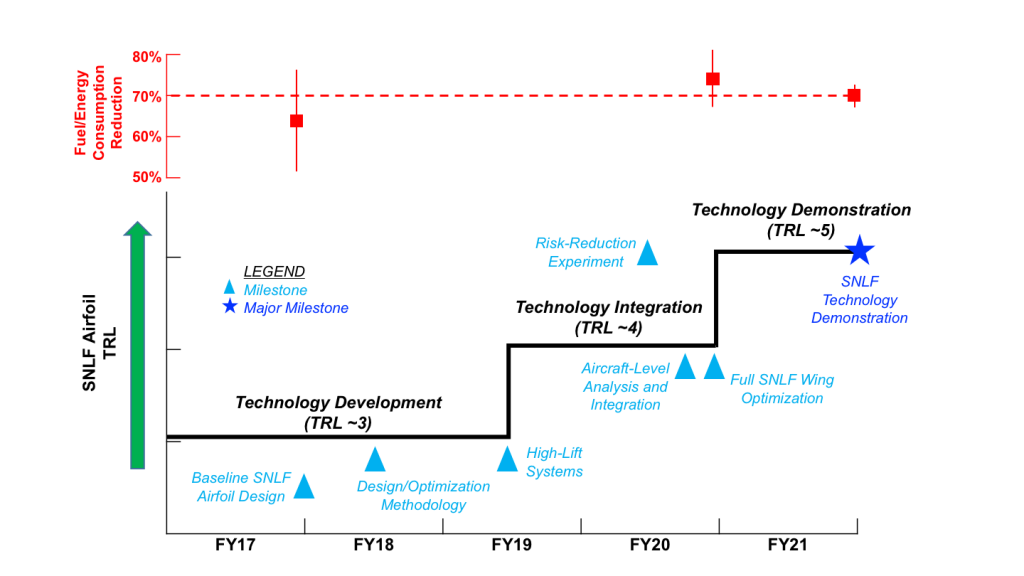 The capstone technology will be evaluated based on the metrics of the NASA ARMD Strategic Thrust 3: Ultra-Efficient Commercial Vehicles.  These metrics focus on reductions in noise and emissions.  Team members will also consider the impact of the SNLF technology on core areas of aeronautics, including aerodynamics, structures, propulsion, stability & control, and acoustics.  Research by the ULI center will advance this concept as a building block for further innovation in aeronautics.

Tasked with both maturing and integrating technologies.  Research will be focused on improving the efficiency of the overall aircraft at cruising speeds.  Aviation industry partner, Airfoils, Inc., will design a slotted, natural-laminar-flow airfoil based on the specifications elaborated by researchers at University of Tennessee, Texas A&M, Penn State University and Boeing.  Researchers will optimize the shape of the airfoil based on the results from experimental and theoretical testing.  Further wind tunnel testing will verify and validate performance improvements of a fully optimized SNLF airfoil.  The sub-group’s final task will be to demonstrate the concept as part of a complete aircraft configuration.

Tasked with developing the capabilities to design and optimize the aerodynamic and structural elements of the airfoil. These capabilities will draw on computational-fluid-dynamics and aero-structural acoustic design to inform every design aspect of the airfoil, including materials, shape, size, angle and placement on the aircraft. The sub-group will carry out extensive computational simulations to confirm that optimization is on track with performance targets, while simultaneously pushing forward the optimization process.  Carrying out these early tests in a theoretical environment will reduce the duration and cost of research.  Results from simulations will be cross-validated by experimental, wind tunnel testing undertaken by the other sub-groups.  The Methods & Analysis group will carry out the critical task of decomposition of drag sources, which will guide design decisions for the overall aircraft configuration.

While the first two technical sub-groups focus on cruise characteristics of the SNLF airfoil, the research of the third sub-group focuses on flight performance at the lower speeds necessary for landing. This is a critical component for applying the SNLF technology to a functional commercial aircraft.  Research will focus on developing a high-lift strategy for SNLF wings that simplifies conventional mechanical flap systems, reducing wing weight and aircraft fuel consumption.  The strategy will be pursued by incorporating active trailing edges that are programmed to deploy during landing and active flow control to enhance maximum lift.  These concepts will be tested through a collaborative experimental and computational effort by Rutgers University, University of Illinois at Urbana–Champaign and University of Tennessee.  The use of a SNLF airfoil will also contribute to a much quieter flight.  Penn State University will head up the process of quantifying and improving the noise-reduction benefits of the SNLF technology.

The flagship campus of the University of Tennessee System and partner in the Tennessee Transfer Pathway.